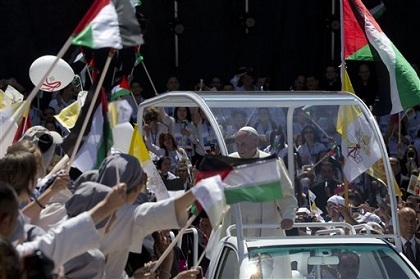 Pope Francis from Bethlehem urges an end of the increasingly unacceptable Israeli-Palestinian conflict On his arrival to Bethlehem after a short visit to Jordan to begin the most sensitive part of his visit to the Middle East, Pope Francis urged an end to the unacceptable Israeli-Palestinian conflict, calling on leaders to show  courage  to achieve a peace based on a two-state solution  t the star 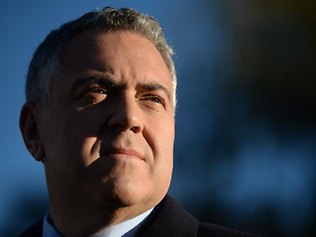 Mixed Arab opinion towards federal budget:36% in favour and 19 per cent claim it is the worst ever. Joe Hokkey announced his first tough budget on Tuesday introducing welfare, health,education cuts, fuel excise with a centrepiece of infrastructure and medical research, claiming that cuts will trim next year’s budget deficit to $29.8 billion to prevent debt from increasing into catastrophic level

Hizbollah will visit Bkirki in an attempt to persuade al-rahi to cancel his trip to Jerusalem Patriarch Beshara Botros al Rahi’s received huge critics from Hizbollah and other parties over his upcoming visit to Israel..The Kuwaiti daily al-Anbaa revealed that a delegation from Hizbollah is expected to visit Bkirki this Tuesday to indirectly persuade the patriarch to cancel his trip whi

Gemayel meets political leaders.Meetings were difficult and relaxed! Kataeb Party chief former president Amine Gemayel toured on various officials during this week in an attempt to save the country from a vacuum. He has held talks with leaders Geagea, Aoun, Franjieh and Walid Jumblat. Gemayel described the meetings with Lebanese Forces leader Samir Geagea as very dif

George Basha: Combination 2 on the agenda Source:ALN After the big success of his Australian movie “Convict” , Australian Lebanese filmmaker George Basha is discussing to screen the movie in the middle-east. “Many offers were made to enter the movie in large scale Film festivals in Arab countries, but no decision made so

Al Rahi: I am going to the Holy land and whoever is against my visit don’t come to Bkirki. Maronite Patriarch Beshara al-Rahi stated on Tuesday that it is his duty to welcome Pope Francis in Jerusalem, asking those against his visit “not to visit Bkirki.” “I am the Maronite Patriarch of Antioch and All the East, of regions expanding from Turkey to Mauritania, Saudi Arabi

Rifi:We will continue resisting the May 7’s destructive path.The adventures will fire back at them Justice Minister Ashraf Rifi said on Tuesday that the adventures of those who violated the state’s dignity on May 7 2008 will fire back at them, vowing to continue resisting this destructive path. Rifi commented on the infamous May 7 events on the eve of their sixth anniversary in a statement,